Last week Steve Goodman, founding director of the Educational Video Center (EVC), joined MASCLab for a very special conversation about his recent book, It’s Not About Grit: Trauma, Inequity, and the Power of Transformative Teaching.
(See below for a personal reflection by Lívia Galvani de Barros Cruz, C&T doctoral student) 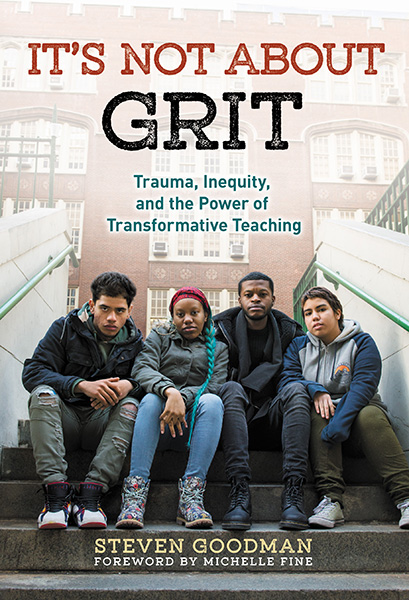 Founded in 1984, EVC is “a non-profit youth media organization dedicated to teaching documentary video as a means to develop the artistic, critical literacy, and career skills of young people, while nurturing their idealism and commitment to social change.”

The conversation ranged from equity to specific EVC projects and opportunities to the transformative possibilities of multimodal education. Steve was joined by two alumni of EVC to discuss the mission and guiding framework of EVC, as well as how his understanding of grit has changed over the years, following his work with EVC students. Steve first took a deep dive into how different lived experiences of students and greater social contexts and inequities get in the way of academic achievement, no matter a student’s “grit.” He then yielded the floor to his former students, who shared their experiences with EVC: how the program supported them in returning to school, the documentaries they’ve made with EVC, and their own perspective on “grit”.

Steve’s presentation was followed by question and answer with the audience, where he shared more about how to create these kinds of innovative and loving spaces in traditional classroom and school settings, as well as where there is room for hope in our education system.

EVC embodies the varied and powerful possibilities of applied multimodal scholarship, and MASCLab was so honored to facilitate this conversation!

Reflections on It’s Not about Grit, by Livia Galvani de Barros Cruz

There has been an image circulating on social media in the past couple of days that says “niguém solta a mão de ninguém” (nobody let go off nobody’s hands).

As far as I know, the image started circulating after my country, Brazil, elected the most far-right candidate of the history of our country, to occupy the presidency starting in January 2019. Electing a president that has openly said that the biggest mistake of the 20-years of dictatorship in Brazil was not torturing thousands of people. The biggest mistake was not killing enough people. According to him, other 30 thousand lives (at least) should have been lost. A man that told a congresswoman that she should not worry about rape or even being raped because she is too ugly. He would not rape her because she was not his type, she was too ugly for him. A man that during the recent campaign said that anyone that does not agree with him or his government policies and politics could either leave the country or go to jail. He also said that he will use machine guns to swipe off all members of the opposition party. The list of atrocities goes on and on. Nevertheless, this same person obtained 57.8 millions of votes. More than fifty-seven MILLIONS of people supported his candidacy. Although the 57.8 millions do not represent the majority of the country’s population (it represents only 39% of the total population of the country) it is the majority of the validated votes. It is important to mention that the Brazilian electoral system is a direct system, which means that the citizens vote directly to the candidate of their choice. In any election, a citizen has three options a.) vote for a candidate b.) vote blank, or c.) annulate your (own) vote. The person that obtains the majority of the votes among all the validated votes (all the three options above) is elected for office. Also relevant to say that in Brazil, voting is mandatory to every citizen aged from 18 to 70 years old. Failure to comply with this obligation is punishable.  Living in the U.S. for the last 3.5 years, I recently transferred my vote to New York in order to vote from afar. A decision based not only on the mandatory duty, but also mainly on the desire to maintain my civic right to actively participate in the election of the person who will govern Brazil for, at least, the next four years.  It was from afar, from my home in New York that I first saw the “niguém solta a mão de ninguém” image.

It was a gelid Sunday night. The geographic distance enforced the harsh loneliness feeling that is always around in my immigrant day to day life. It is as if this “harsh loneliness” is permanently waiting for any tiny gap to just step by and enter your heart completely uninvited. Being away from loved ones is never easy. Especially in moments in which the thing you want the most is a warm strapping hug. Truthful human contact that helps to keep the humanity close by and to put the hurt and despair in perspective. A long lasting embrace to reconnect with Love’s energy and remind yourself that Love is still there. When I first saw this picture on my social media timeline, I had my eyes swollen from the hurtful and deep crying my broken heart and soul were experiencing post-elections result. My eyes landed on this image and, for a few seconds, I could feel a tiny light turning on inside my heart. A bright twinkle that was notably without its fullest shine, but still made me feel a warmer beat inside my chest. The warmth made me want to join the sharing of the image. Hoping for hope. Hoping for a virtual hug.

Monday October 29th 2018. What a Monday! Woke up feeling like I had been in another dimension. I could not read a line, write a word, listen to a sound, take a bite, move my body without feeling my whole mind-body fluctuating among emotional, spiritual, and physical dimensions. I couldn’t tell myself: vamos, se concentra (c’mon, concentrate) because I wasn’t even sure what this meant in that moment. Concentrate on what? Where? Why? So, I went with “let’s just be.”

Just being, at 2:25 pm I hoped on folha (my bicycle) and went to Teachers College (TC) for a book talk with Steven Goodman. The talk was going to be about his precious and engaging book- or should I say bookmentary, named “It’s not about GRIT: Trauma, inequity, and the power of transformative teaching.” At 2:57 p.m. I entered the room 306 of TC’s Library. It was filled up with people. All the chairs were taken. I decided to settle myself by the window. It has kind of a solid fixed waist-height-furniture that I thought would endure my crisscross seating on top of it. Another colleague joined me. Mr. Goodman started the conversation by sharing a little bit about the stories that are beautifully narrated in the book. He brought to the room some of the powerful voices from the book by showing clips of their documentaries and by reading short vignettes from the chapters. His talk reinforced the importance of not only discussing critical social issues such as health and housing, immigration, and gender and identity, but also taking action considering the micro and macro contexts and the impacts of our civic acts. As he said it is crucial to learn both how to zoom in and how to zoom out. All the time.

After Mr. Goodman finished his “solo” sharing, Muzik and Raelene – two brilliant and inspiring young humans, joined him to an honest and to the point conversation. While listening to them, one of the things that I wanted to make sure my memory wouldn’t fail on remembering later was their mentioning of the power of storytelling. How potent it is to tell your own story and generate social change by doing so. As they all said, things and people may change their own lives and behavior by listening to your/our stories. This resonated so deep in me that I wrote it in my notes: “stories can make a REAL and MEANIGFUL difference.” I guess I didn’t really need my notes to remind me to carry this precious knowledge with me. Here I am taking a first timid step of writing and sharing my own story. More specifically, my personal journey of hope searching after feeling a complete failure witnessing a candidate with unquestionable fascist, racist, homophobic, and misogynist, behavior from being elected president of my own country the previous day. I could now counter that sense of failure for not being able to stop this atrocity neither by voting nor by taking any other actions, with this renewed assertion of the power of storytelling.

I remember reading the book and repeatedly making notes to myself: yes, this! How do we do this with younger people, with 4, 5, 6-years-old? How do we inspire very young people to be civically engaged? I still don’t know much how. However, Muzik and Raelene definitely enlightened the way by demonstrating and arguing that it has to be a combination of love, meaningful connection, and knowledge creation. Build a space where people feel safe and the safeness feeling comes from knowing and being with other humans in (any) space. I know, they are brilliant, right? And it gets even better. Not only were they saying vibrating sapient words, but also their bodies were eradiating truthiness, power, and reality. Muzik was going through serious physical pain, but was still fully committed to being there with the EVC family and with all of us who were in that 306 library room. As Raelene so naturally put it: it seems only fair to give back. That is why they were there with us.

Feeling their voices vibrating throughout my skin, I was transported back to that bright twinkle warmer heartbeat I felt the previous night when I initially saw the “niguém solta a mão de ninguém” image. This is it! I mentally noted to myself. Muzik! Raelene! EVC family! Precious and strong voices, faces, and spirits I instantly related to the image and words that I was holding tight to in my heart since the preceding night. Their stories were telling me that they have been holding each other’s hands through very tough times. Their stories were telling me about the joy and power of creating a compassionate learning community. Their stories were holding my hand and kindly opening space for me to join their powerful social change circle. Listening to their stories, I thought: yeah, it’s not about GRIT, it has never been. Niguém solta a mão de ninguém! That is why I am here today also sharing my story.

Toward an empathic world...

Center for Multiple Languages and Literacies